Expat Festivities while far from home….

Posted on October 22, 2011 by Xpatulator
Being an Expat permits unusual and fascinating events to occur while on your adventure, you belong to a community where celebrating different customs and traditions is an opportunity.

Our first cultural event to be experienced was Ramadan and Eid, this was fascinating and insightful.  Coming from South Africa, we have a diverse society with a mix of cultures, our suburb constitutes Christians, Muslims and Jews with Churches, Mosaics and Synagogues praising God down the road from each other. Our African, British, Greek, Portuguese, Italian, Spanish, American, completely international cultures live together freely and without prejudice. I loved where we lived and still do, everyone is happy and friendly and we reside side by side without discriminating but equally without ever emerging into each others lives.
Being an expat changes your perspective on just about everything, you become more aware of cultural and religious differences, in a positive and energizing sense.  We started our adventure off with heading straight into the heat of the Arabian gulf and our first Ramadan, was both educational and insightful.  I became more aware of the call to prayer, of the berka and abaya and the reasons behind the religious and cultural events that occur in the Islamic faith.  My first Ramadan was a special event, we noted how everyone forfeited their basic need for food and water from sunrise to sunset, and the month is intended to teach Muslims about patience, spirituality, humility and submissiveness to God. At sunset the family gathers together to break the fast with Iftar (fast breaking meal).  Eid Al-Fitr marks the end of the fasting period of Ramadan. A special celebration is made. Food is donated to the poor; everyone puts on their best, usually new, clothes; and communal prayers are held in the early morning, followed by feasting and visiting relatives and friends.

The Canadian and American Thanksgivings are celebrated on different days and months and for different reasons.  The Canadian Thanksgiving is held on the second Monday in October and goes back to an explorer, Martin Frobisher, who had been trying to find a northern passage to the Pacific Ocean. Frobisher’s Thanksgiving was celebrated for homecoming, he had safely returned from an unsuccessful search for the Northwest Passage.  In 1578, Frobisher held a formal ceremony in Newfoundland to give thanks for surviving the long journey.  The tradition of a feast was continued years later, as more settlers began to arrive in the Canadian colonies.
The American Thanksgiving or Thanksgiving Day, is celebrated on the fourth Thursday in November, and has officially been an annual tradition in the United States since 1863 when President Abraham Lincoln proclaimed a national day of thanksgiving during the Civil War.
The event that Americans commonly call the “First Thanksgiving” was celebrated to give thanks to Native Americans for helping the Pilgrims of Plymouth Colony survive their first brutal winter in New England, the first Thanksgiving feast lasted for three days.

We have also started celebrating Halloween and have amazing American friends who have brought all their decorations with them from home. Added to this they have all the traditional games of feeling through jelly to find the witches eggs and walking blind folded through spider webs and of course the scary movies, costumes and copious amounts of sweets that get handed out and eaten!
Traditionally Halloween is thought to have originated with the ancient Celtic festival of Samhain, when people would light bonfires and wear costumes to ward off roaming ghosts. In the eighth century, Pope Gregory III designated November 1 as a time to honor all saints and martyrs; the holiday, All Saints’ Day, incorporated some of the traditions of Samhain. The evening before was known as All Hallows’ Eve and later Halloween. Over time, Halloween evolved into a secular, community-based event characterized by child-friendly activities such as trick-or-treating. In a number of countries around the world, as the days grow shorter and the nights get colder, people continue to usher in the winter season with gatherings, costumes and sweet treats.  Celebrated on 31 October it is a time of celebration and superstition.
We always celebrate our own religious holidays with those friends that we hold near and dear being so far away from home.  Living in a compound, it is not uncommon to walk around and notice different front doors decorated with some fantastical decorations for a special event that is being celebrated in that expats land. It is a magical time for each community and a special occasion for other expats to learn about and appreciate their neighbors. 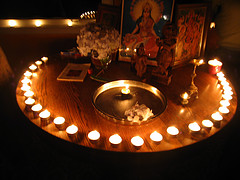 Diwali, which although we have not celebrated, we have listened to the enthusiastic stories of the festival from our Indian friends. It is one of the biggest festival of Hindus, celebrated with great enthusiasm and happiness in India. The festival is celebrated for five continuous days, where the third day is celebrated as the main Diwali festival or ‘Festival of lights’.
Different colorful varieties of fireworks are always associated with this festival. On this auspicious day, people light up diyas and candles all around their house. They perform Laxmi Puja in the evening and seek divine blessings of the Goddess of Wealth. The festival of Diwali is never complete without exchange of gifts. People present Diwali gifts to all near and dear ones.
We always celebrate our own religious holidays with those friends that we hold near and dear being so far away from home.  Living in a compound, it is not uncommon to walk around and notice different front doors decorated with some fantastical decorations for a special event that is being celebrated in that expats land. It is a magical time for each community and a special occasion for other expats to learn about and appreciate their neighbors.