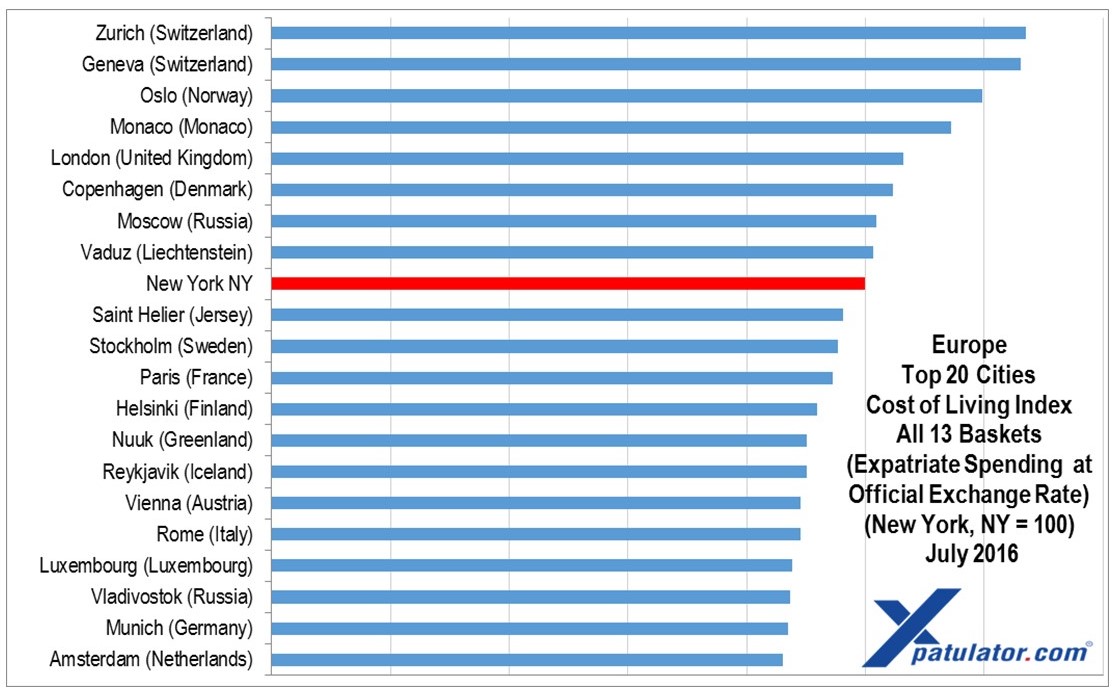 Zurich and Geneva are ranked as the first and second most expensive expat cities in Europe and the 5th and 6th most expensive cities in the world for expatriates. This is due primarily to the strong Swiss Franc which has maintained its position against the US Dollar despite the dollar’s strong showing in 2015, as well as due to high rentals and institutionalized high wages.

Despite the fact that there have been moderate price increases in most of Europe, the Euro has weakened against the US Dollar which has resulted in lower USD prices, pushing Euro cities down in the global ranking, only one of the top ten most expensive cities in Europe is on the Euro (Monaco).

Oslo is the world’s 7th and Europe’s third most expensive city as at August 2016. Oslo was the most expensive location in Europe in 2014, however the weaker Norwegian Krone (more than 18% weaker against the USD by the end of 2015) resulting primarily from the lower global oil price and subsequent weaker oil sector.
http://www.xpatulator.com/cost-of-living-article/Europe-Expat-Cost-of-Living-Comparison-Rankings-August-2016_684.cfm

Xpatulator.com is a website that provides international cost of living information and calculators that can help you determine cost of living indexes, cost of living allowances, salary purchasing power and international assignment packages to compensate for cost of living, hardship, and exchange rate differences.
View all posts by Xpatulator →
This entry was posted in Uncategorized and tagged comparison, cost, europe, expat, living. Bookmark the permalink.
Mac-Moments