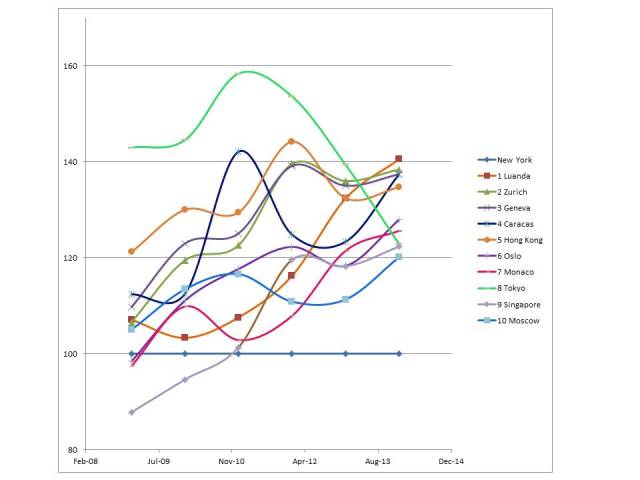 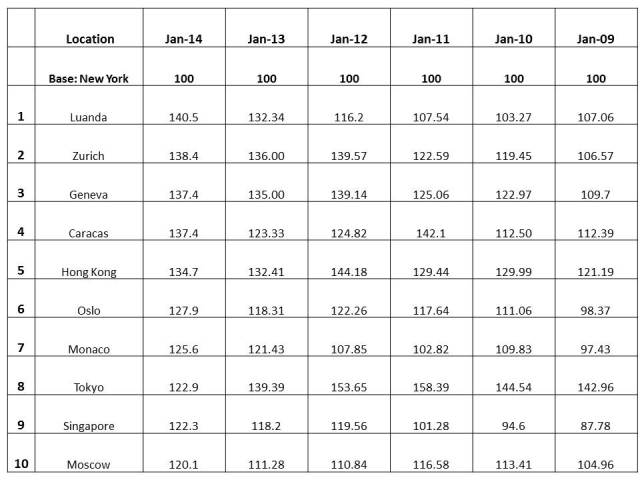 1. The most noticeable change in Cost of Living Index (COLI) is Tokyo from 142.96 to 122.9 index points, this is primarily due to the Yen weakening against the US Dollar, hitting a five year low in 2013 and having lost more than 20% to the US Dollar in the past year.

2. Luanda in Angola has moved from an index of 107.06 in 2009 to a 140.4 in 2014 making it the most expensive destination for expats in Africa and the world.  This change is mainly due to supply and demand of expat accommodation which is costly. A rented house in a guarded community can cost between US$8 000 and US$12 000 per month, other costs for schooling, groceries and entertainment are also costly.

3. On an upward trend is Singapore moving from an index of 87.78 in 2009 to 122.3 in 2013, this is due to the continued expat influx resulting in a high demand for expat accommodation and goods, high transport costs, and high infrastructure costs, coupled with a strong currency. The Singapore COLI could continue this upward trend.

For more information on the Top Ten Most Expensive Cities to live in as an expat go here.

Le donne lo sanno...life-styling
Que Sera, Sera... Whatever Will Be, Will Be...